My experience with racial injustice in the courts

Posted on December 12, 2014 by Newell Hendricks 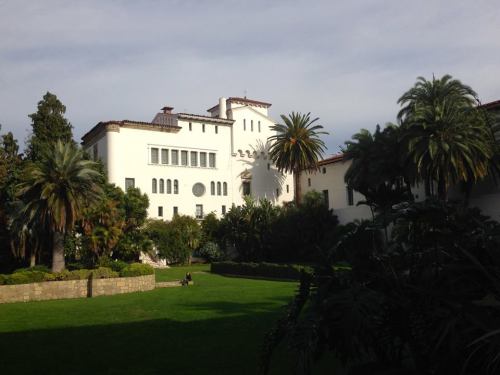 The third floor of this Santa Barbara Court House is a jail. I looked out through these windows as I awaited my hearing. Here is the section of my book where I talk about it.

Of course, not being registered, I received another induction order. The law said that if one was not living in one’s home district when the order came, one could report to a different draft board on the date and that draft board would either provide transportation to the home draft office, or transfer the papers to the new location. I decided to hitchhike to Ed’s ranch and report to the draft board in Delta, Colorado. But I had an old ticket to clear up before I went. Police routinely checked records of hitchhikers, and I didn’t want to end up in a jail somewhere in the Mojave Desert.

While I lived in the three-bedroom house I owned an old Harley Davidson motorcycle to get to school and visit my home in Glendale. It was something of an antique, a 1948 “chopped hog.” For me it was functional, but it would have needed a lot of work for a real biker to ride. I got a ticket from a motorcycle policeman who I think was mainly disgusted that I hadn’t fixed up the bike. He gave me a ticket for not having a mirror, but also wrote, “generally unsafe” on the ticket. So I parked the bike and didn’t ride it, but never did anything about the ticket. So I went to the court-house and the lady looked up my name and said:

I was taken to the third floor of the Presidio, a beautiful Spanish building in downtown Santa Barbara. It was a little embarrassing in the jail.

I spent the night in jail and the next morning watched the proceedings of the court. At least half of the cases were Mexican agricultural workers with minor infractions. The standard sentence was $50 to be paid by working five days picking lemons for some orchard owner who had a deal with the court. I figured that’s what would happen to me. But when my case came up the judge told me to just fix the bike and come back the next week. I told him I didn’t have the money; the bike wasn’t being ridden and had some value but I didn’t have time to deal with it. He insisted that the case be continued till the next week. I waited a week, came back and said the same thing. I asked the judge to just fine me and let me work it off picking lemons. But he told me that he was going to continue the case for another week and if I had already left, we could pick up the case when I got back. So I was telling him to convict me and he was telling me to skip out on a court date! It was actually pretty racist. He couldn’t bring himself to treat a white college boy the way he treated the Mexicans.

I have lived a good life. Maybe a counterculture life, maybe a normal life. I have written operas, built houses, been involved with cross-cultural education between Latin America and the U.S, and hardly ever had a job I have helped raise two wonderful children with my amazing wife. It's been a good ride. And I go to church. I've just finished a book of stories from my life, I am still connected to an organization in Nicaragua that promotes sister relationships between communities, faith communities, or schoold, and to the extent that my cancer doesn't pull me down, am attempting to share some of what I have learned, or at least tried out. Welcome, and let's share.
View all posts by Newell Hendricks →
This entry was posted in Uncategorized. Bookmark the permalink.